When it comes down to inventions, motorbikes are obviously a lot more limited that cars due to the lack of space. Another issue is that motorbikes are open to the elements, while cars are not. Furthermore, you need more concentration while riding a motorbike than you do driving a car. Depsite all of this, motorbike manufacturers are constantly coming up with new inventions for their bikes. While there have been some inventions that have gone on to have huge success, there have been plenty that have flopped big time. Below we are going to take a look at some of the most useless motorbike inventions.

iPod docking stations are a great addition to any car, but ones for a motorbike do not make a whole lot of sense. First of all, it is really hard to hear music while on a motorbike because of the noise of the engine and the wind rushing by your ears. Second of all, you would have to have shuffle on all of the time because scrolling through a list of songs while riding a motorbike is very dangerous. Third of all, the iPod would have to be very secure or it will just fly off, potentially causing an accident. Despite these obvious flaws, many motorbike manufacturers such as Harley Davidson and Triumph sell bikes that have option iPod docking stations.

Under the Seat Exhaust Pipes

Why? This is what most motorbike rides ask when they come across an exhaust pipe that has been placed under the seat. Not only will this make the seat extremely hot, but the rider will be smelling the exhaust fumes all the time they are riding their bike. This invention just makes no sense at all, especially when belly mounted or side mounted exhaust systems have no issues. This was something that was done for cosmetic reasons, but they really failed to have a look at the practicality of it.

A G-Force metre, as you can probably guess, measures the G-force that is being generated by a bike at a certain time. It will fluctuate as you take a corner, speed up, slow down, or change lanes. Why is this needed on a bike? It is not, that is the quick answer to that question. In fact, knowing what G0force is being exerted on your bike does not have any impact on how it operates. The only thing a G-force metre really does is distract the driver as they are continuously looking down to see if it has moved up or down. 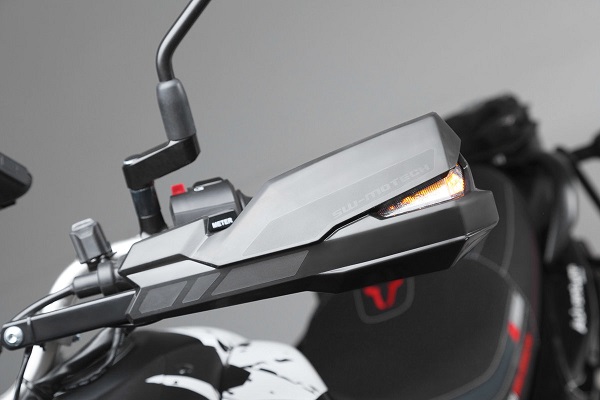 Hand guards are found on off-road and dirt bikes to protect the rider’s hands from flying dirt, rocks, and other types of off-road hazards. Hand guards are often made from plastic that is easy to replace if it gets broken, yet there are some motorbike manufacturers that have decided to stuff hand guards with electronic indicators such as temperature gauges and turn signals. This is not needed and means that when the hand guard gets broken or cracked,the rider will have to shell out a lot more money to replace or fix them.

This is another innovation that works well in cars but does not work well in motorbikes. Self-cancelling turn signals do not work well on bikes because, for some reason or another, they have a hard time telling when the turn has been completed. This means that a lot of time the signal does not switch off, and it is it not like the rider will be able to hear that clicking noise over the sound of the engine and the wind. This is why turn signals that have to be manually switched on and off will always be the best option for motorbikes.

GPS might be the way that the world is going, but it does not work well all of the time, and it is not a good idea to have it on motorbikes. A GPS on a motorbike is very distracting and is hard for riders to operate safely. Taking a hand off of the handlebar to enter an address or change coordinates can be very dangerous. There are already many distractions out there on the road, and motorbike riders do not need another one.